Spurs are ahead of West Ham in the race to sign Darwin Nunez from Benfica this summer, according to a new report.

Tottenham are said to be at the front of the queue to sign the striker, as they are currently in the top four of the Premier League. 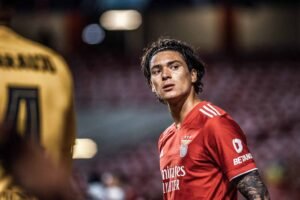 We know that the Hammers are interested, as we reported earlier today, and boss David Moyes is keen to get a deal done.

However, the report in Portugal, from Record, claims that the Uruguay international wants to play in the Champions League, meaning that Antonio Conte’s side currently have the advantage.

It remains to be seen if Spurs will qualify for the Champions League – the run-in is set to go to the wire – but it may be necessary if they are hoping to do a deal for Nunez.

He will cost over £60m in the summer and there is also said to be interest from Newcastle, although it is unlikely that they will be able to sway him given their league position.