Posted by Sean Whetstone on June 6, 2018 in News, Whispers 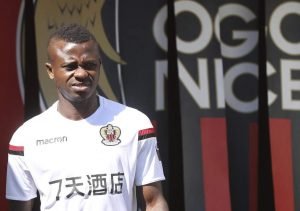 West Ham will attempt to hijack Chelsea’s talks to land Jean Michael Seri, if media reports are to be believed. The 26-year-old Nice midfielder has been in demand since last summer, with Arsenal, Manchester United and Barcelona in addition to Chelsea all interested.

Rumours are that Chelsea is in the latter stages of securing a deal for the sought-after star but that has highlighted his availability to a number of clubs who like to come in at the eleventh hour.

Borussia Dortmund and Napoli have also joined the chase for Seri’s signature in the past few days in addition to West Ham. The Ivorian international is reported to be available for a price of around £35million and will not short of suitors on the continent and in the Premier League.

← Pellegrini speaks out: “No problems with the board”
West Ham target looks for way out of Lazio →
Click Here for Comments >