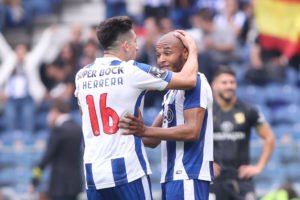 Moussa Marega, Yacine Brahimi and Hector Herrera are thought to be the three players West Ham scouts have been watching.

Youngsters Mesaque Dju and Xande Silva recently joined the Hammers from Portuguese clubs as the Hammers are keeping a keen watch on the Primeira Liga.

29-year-old Brahimi joined FC Porto in 2014 for £3.60m but his contract expires this June and is available on a free transfer.

29-year-old Herrera joined FC Porto in 2013 for £5.4m and his contract also expires this Summer. Although he is also available on a free transfer he is thought to have agreed a verbal pre-contract with Atletico Madrid. That deal is being held up due to Herrera being a few months short of gaining his EU citizenship.