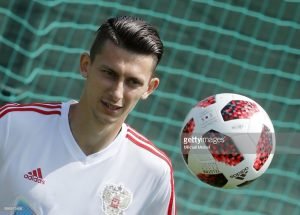 Italian media claim that West Ham is one of a number of clubs interested in snapping up Spartak Moscow centre-back Ilya Kutepov this summer.

According to Tuttomercatoweb Lyon, Fiorentina and RB Leipzig in addition to the Hammers are tracking the 24-year-old defender with a view to bid after the World Cup finishes.

Kutepov became Russia’s main centre-back in the World Cup after a string of injuries and has impressed many as he helped Russia claim wins over Saudi Arabia and Egypt.

The Russia defender claimed worldwide fame talking about the prospect of defending against Uruguay striker Luis Suarez –  promising to “bite him myself” if need be to stop him scoring against Russia. At the previous World Cup in Brazil in 2014, Suarez received a four-month ban from all football matches after he bit defender Grigorio Chiellini during Uruguay’s group game against Italy.

Manuel Pellegrini is known to be in the market for a second centre-back after signing 21-year-old Issa Diop from Toulouse for £22m, Angelo Ogbonna or Winston Reid could be outbound as the new manager looks to shake up the centre of defence next season after the Hammers conceded a record number of goals.