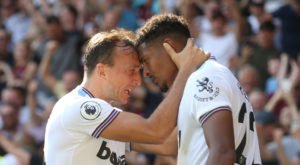 Mark Noble’s call for Seb Haller not to be put under pressure is  praiseworthy but maybe a little sensitive.

Seb is a 25 year old Frenchman who cost £45 million plus extras and has played over 250 professional games, scoring a total of  102 goals for such as Eintracht Frankfurt and Utrecht along the way.

He has also managed 25 goals in 57 games at every level other full international for his country . We are not talking about Xande Silva or Albian Ajeti here who indeed may at some point need a protective arm from the skip..

Since arriving at the London Stadium Seb has managed three in three, drawn wide media praise and looks to be one of the best signings the club has made in a long time.

I have all the respect in the world for Mark Noble but for the media to ignore the achievements of Haller on the basis that they will put pressure on him seems a little bit odd.

Even the player himself has been regularly commenting on his own performances speaking of his joy and even – after Watford  – claiming he wasn’t at his best.

The reality is that Seb is big enough,old enough and ugly enough – as the saying goes – to look after himself and after three goals in three games following a £45 million arrival, he’s the man of the moment and will be discussed.

No disrespect to Nobes – he’s a great skipper and a great bloke – but successful footballers are discussed . It’s par for the course and if positive media coverage is pressure, bring it on.

Respect to you Nobes but it would be a surprise if Seb can’t cope!

← Defender’s return may be just two weeks away
Is Pelligrini Setting Up For A False Number 9? →
Click Here for Comments >

One comment on “Respect Nobes, but Haller can surely cope”