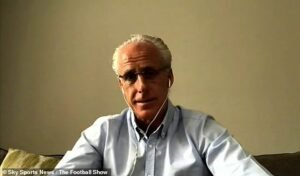 Former Republic of Ireland manager Mick McCarthy says that Declan Rice’s decision to represent England ‘went down like a lead balloon’ when he told the manager of his decision.

Speaking on the Sky Football Show, McCarthy said: ‘[Declan Rice] How it went down? Like a lead balloon. He played three games, scored and kissed the jersey.

‘Players have a choice who they play for. If you’ve played a friendly, a full international, should that put you down as a certain country’s player, English, Irish, Scottish, whatever? I think it should.

‘He had his choice, I went to see him and his Dad. I didn’t think he would come with us, he was erring on the side of playing with England. I was curt with him on the phone, I had to ring back and wish him well, a good career for England and West Ham. I was so disappointed we lost such a good player.

Rice was born in Kington Upon Thames in Surrey but of Irish ancestry, since his switch, he has made seven senior appearances for England.

2 comments on “Rice decision went down like a lead balloon”