Posted by Dave Langton on November 30, 2018 in News, Whispers

Declan Rice is looking forward to returning to St James’ Park this weekend.

The youngster enjoyed two of his key moments in Claret and Blue shirt in the north east. 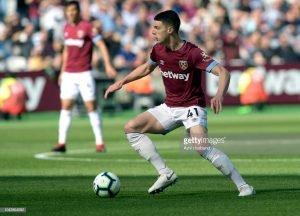 Rice captained the Hammers’ Under-23 side to a Premier League 2 Division 2 Play-off final win over the Magpies in May of last year.

Yet he struggled three months on with the senior side, as he was hooked at half-time after gifting the Magpies a goal in the first half.

And the 19-year-old is keen to exorcise that ghost this weekend, as the Irons look to halt a run of three losses at St James’ Park.

He told the club’s official website: “Without a doubt, winning the Premier League Cup at St James’ Park was a great experience and one I’ll never forget, but then starting for the first team, making a mistake that led to a Newcastle goal and being taken off at half-time last season was completely different.

“I think that experience set me up for a good season last year. It’s all about learning from setbacks and realising the intensity of the Premier League, so I’m looking forward to going back there and hopefully getting the win this time around.

“St James’ Park is a top stadium and it’s full of passionate fans and you can really hear that roar when you’re walking out, so I’m really excited by the prospect of playing in that atmosphere again on Saturday.”

ClaretandHugh says: Never have the highs and lows of football so well demonstrated as in this little story of Declan’s experienced after such a short time in the game. Whether Slaven Bilic should have hooked him at half time is a question which I spoke of at the time. I thought it was unfair and uncharacteristic of the man given that the teenager was left entirely exposed  with none of the other midfielders – notably Nobes – failing to get in any sort of challenge to help him out. Thankfully, Dec has a very good head on his young shoulders and the episode probably did him more good than harm. He’s shown he is a very quick learner and he has recovered from that to become one of the club’s most important players. All that is needed now is a win to erase the memory entirely by ensuring that is journey home is a much happier one with three points in the bag.

One comment on “Rice desperate to exorcise ghosts of St James’”