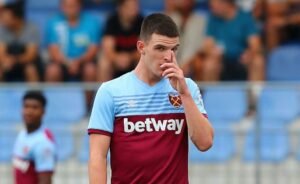 In a day where all the headlines were about Michail Antonio,  Declan Rice quietly did what was expected of him

The 21-year-old achieved 56 passes with a 93% pass accuracy, made 3 dribbles, won 8 accurate long balls, made 3 tackles, won 3 interceptions., made one blocked shot and won one aerial won with 7 out of 9 duels won during the Norwich City v West Ham game.

We have come to expect this from our defensive midfielder and second captain.

David Moyes has reportedly promised to build next season’s team around and with the chances improved that Wes Ham will survive in the Premier League the Hammers will hope he will see out at least next season.

West Ham sees him as the next permanent club captain to replace Mark Noble when the time is right but in the meantime, he will deputise every minute he can as a natural-born leader on the pitch. One day he will captain England such as Bobby Moore did, I have no doubt.