The Guardian are reporting that West Ham captain Declan Rice, now considers Arsenal to be a real and viable option when he leaves The Hammers at the end of the season.

Rice is believed to be hugely impressed with the transformation of the Gunners this season, and in particuar the management style of Mikel Arteta.

The England midfielder will definitely leave West Ham in the summer, for a club who can offer him Champions League football. Arsenal find themselves at the top of the Premier League with games to spare following a last ditch win against Manchester United yesterday. 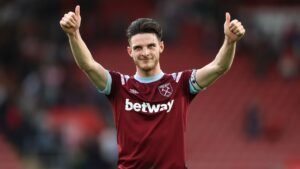 There is no shortage of interest in Rice with Chelsea and Manchester United both thought to be long-term admirers. But Arsenal may now be the favourites to land the England star who is keen to work with his international teammate Bukayo Saka.

Reports from the Emirates appear to indicate that Arsenal are increasingly confident of securing Rice’s services and winning the race for his signature.

← Thanks for everything Daws
Ings: “It was an opportunity to which I couldn’t say no” →
Click Here for Comments >