Posted by Sean Whetstone on September 18, 2019 in News, Whispers 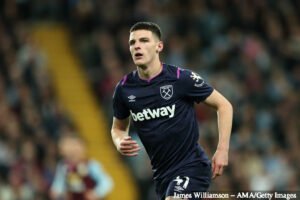 Declan responded on Twitter to the fan saying “Thank you. Got to say, stadium atmosphere was brilliant. Great set of fans. Passionate”

The Villa fan wasn’t alone in his comment and below is a small sample of the praise heaped on Rice by opposition fans after Monday night.

“Got a bit of stick from us behind the goal (Holte end) and you took well. Class act. All the best”

“Fair play to you Declan. You’re a quality player, great to see you in the flesh, as it were. And a touch of class at the end applauding the Villa fans. Al the best for the season.”

“Very impressed with you last night, best player on the pitch for me. West Ham have got an incredible talent once again.”

“Great player, wasn’t convinced until watching in the flesh last night 😂 what a talent”

← West Ham Podcast: Aston Villa away
Sunday could be a big day for Fornals →
Click Here for Comments >

2 comments on “Rice gets unexpected response from Villa fans”