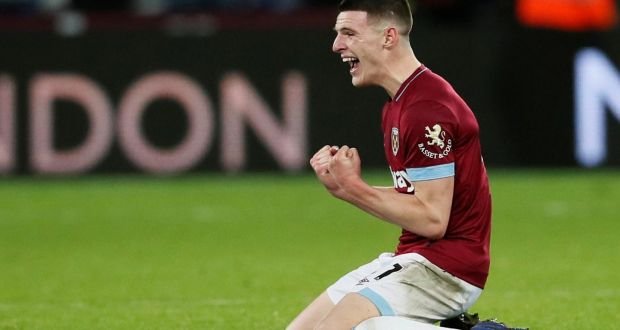 Declan Rice was absolutely astonishing in the Hammers midfield as the Hammers gained a great point at te Vitality Stadium yesterday.

All that is good in a defensive midfielder’s game was there  for all to see as he rammed any recent criticism right back down his critics’ throats.

From start to finish he was on top of everything that came his way leaving it an incredibly tight call between himself and Andriy Yrmolenko as the man of the match.

In the end the Ukranian just about edged it for his match changing moments including a goal and an important start to the assist which led to Aaron Cresswell’s goal.

But Declan, for all that, produced as near faultless performance s it gets in a game which entertained from start to fnish and showed the Irons have added some much needed grit to their game.

That has been so good to see and the 20 year old’s contribution in midfield has been a major factor in that as we have continued on our unbeaten run and into third place.

Commenting after the game Dec said: “I think it’s a really good point, a massive point actually. We’re sitting third at the moment, and regardless of how the other games at the weekend go we want to keep up around the Champions League spots.

“It was important that we kept our heads when we went 2-1 down and I think that’s the main thing about us this season – our togetherness and the character of our team.

“We’ve given 100 percent, we’ve got the goal back and we could have maybe nicked it late on. We’re really happy with the performance and it’s great to come away with point.

He added: “I’m buzzing for Cress. It’s a great run from left back and when we watch it back later we’ll see it – it was timed to perfection and when he’s in that area he’s never going to miss from there.

“It was a clever little header down from Felipe and Yarmo again coming up with the goods. A great goal and a great performance all around.”

“It was massive to bounce back from midweek. We let the fans down massively – for them to travel to Oxford and for us to concede four goals is not good enough. We understood their frustration and all the lads were gutted.

“It was one of those things, we bounced back today, we gave 100 percent and I think the fans will be proud of that performance today which is what we want to give them.”