Rice opens up on his “massive disappointment” 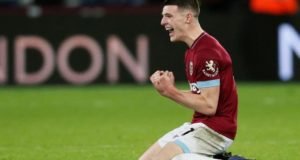 West Ham star Declan Rice has opened up on his shock Chelsea exit at the age of 14, describing it as a “massive disappointment”.
The England midfielder was released by the Blues as a teenager and admits he never saw it coming
The 21 year old  joined the Blues’ academy in 2006 but was ultimately released in 2014 as he was left to chase his football dream away from Stamford Bridge.

While Rice has gone on to prove Chelsea wrong as he stars for the Hammers, the midfielder admits the exit really shook him but didn’t sway his desire to become a professional footballer.

“I had to overcome a massive disappointment of being released by Chelsea at the age of 14,” Rice told Sky Sports’ Soccer AM.

“That was everything I ever knew to be honest. From nine to 14, training there Monday to Friday, playing games and to get told you won’t be a part of that anymore was a major shock. I never thought it would have to happen but it did.

“And then I had the fortunate chance to sign for either Fulham or West Ham and chose West Ham and started a whole new chapter.

“I knew it was going to be tough, but always as a kid I wanted to be a professional footballer. Nothing was ever going to get in the way of me working as hard as possible to become that.

“I was just so driven and wanted to be the best I could be. I had to make sacrifices, move away from home, move into new digs, and now all the decisions that I made have played out really well.”

Now he is looking forward to getting underway again as soon as possible but warns players will need at least three weeks to prepare for an end to the season ‘campaign.’

He said: “If you are looking to go straight back into it, you’re going to look at so many injuries. That’s what clubs are saying,

“You need at least three weeks of high intensity interval training to get yourself back in shape with the football.

ClaretandHugh says: With all the talk of a return to Chelsea we’ve been hearing, I’m not sure we needed to hear Dec talking about his shock at having had to leave Stamford Bridge However, for fear or favour, we have learned that Declan tends to tell it as it is. He is clearly right about the players needing three weeks to get back into condition in order to finish a season which in Hammers terms remains absolutely critical. David Moyes says he would prefer a month but should, and it’s a big SHOULD, the government give the go ahead for players to return to training at their next review on May 7, that would see the players in training until the beginning of June when presumably a behind closed doors campaign would get underway. Realistically, I think most of us would be shocked were that to be the case.

← Poll: Should the season be declared null and void?
Meet the other ‘Mr West Ham’ →
Click Here for Comments >