Declan Rice will not freeze at Euro 2020, according to his old PE teacher!

The Hammers midfielder will be a key man for England at the tournament, with the Three Lions taking on Croatia in their first game on Sunday. 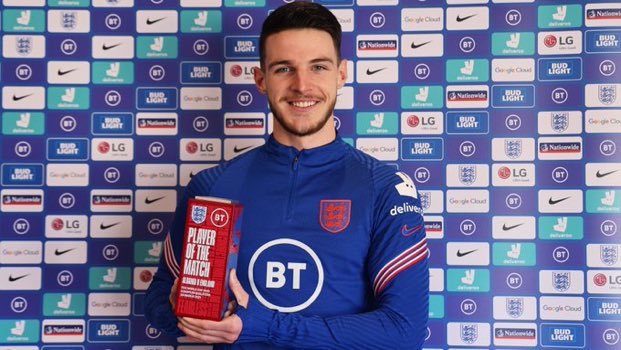 Rice is almost guaranteed to start that game, such has been his development in recent months, and his form will be central to Gareth Southgate’s men going the distance and ending their 55-year trophy drought.

The London Evening Standard have interviewed Rice’s old PE teacher, and he claims that he has no doubts over the 22-year-old’s ability to embrace the biggest stage, rather than freezing on it.

Indeed, he believes he will also put his hand straight up if it comes to a dreaded penalty shootout; England exorcised a fair few demons at the 2018 World Cup, when Southgate’s side beat Colombia on spot-kicks.

Speaking to the Standard, his old teacher said: “Declan has a great temperament. He liked to joke around in the dressing room. He was confident but not cocky and was always a pleasure to be around.

“He was one of the boys and still is, fame has not changed him one bit. He still has his old group of friends and comes to visit us at the school. He is an amazing role model. On the pitch he is very serious, extremely hard-working and takes responsibility — he is a natural leader.

“He was good at other lessons as well, particularly drama. He was at the time a smallish lad with a big personality. He wouldn’t get stage fright at the Euros. If he was taking a crucial penalty I would bet on him scoring every time. He doesn’t mind being front and centre stage. He’d volunteer to take one.”

Rice has won a total of 17 caps for England.