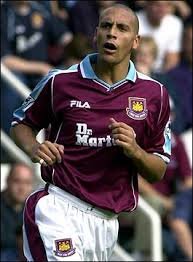 West Ham rate themselves at no better than even money chance to move in on out of contract Rio Ferdinand.

It has been widely speculated that the club may be ready to bring him back to the Boleyn Ground for a last Irons hurrah.

It has also been reported that the former star is “desperate” to make a Hammers return but ClaretandHugh has discovered that may be slightly over-cooking the situation.

Although sources inside the club believe the 35 year old still has something to offer it is certainly no given that the Peckham-born central defender would be offered a deal.

ClaretandHugh were told: “Rio has had a great career and as a club we have to be proud of his achievements as one of our former academy youngsters.

“We have targeted several areas and central defence may not be one of the priority areas at this moment.”

There is also believed to be an interest from the MLS, and Fulham. Alongside that is the players long term and close friendship with former boss Harry Redknapp.

Meanwhile, Bruce is reported as saying: “Rio has been a wonderful player… who knows?  If he fancies a game, once we’ve got over the weekend, then I’ll see if we’ll give him a call.”

West Ham will be waiting until the future of Sam Allardyce is sorted before making any signings this summer anyway.

2 comments on “Rio Irons return no better than evens”