Room for optimism at West Ham? 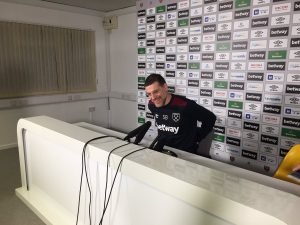 Slaven Bilic’s job prospects may have been causing a few more frowns than usual this week but he can take another step towards securing his future tomorrow.

The upturn in results has of course helped enormously but a mini slump needs to be corrected fast at the London Stadium tomorrow.

Given how deep in the doldrums we were after a 5-1 home defeat at the hands of Arsenal in December and relegation fears abounding the response has been decent and there remain hopes the Hammers can  soar up the table and finish the season in the top half.

That sort of revival could give David Gold and David Sullivan the confidence in Bilic to give him another season or more in charge. Back in December he was among the favourites in the betting to be the next Premier League manager to leave his post.

Since then there have been several sackings – Bob Bradley, Claudio Ranieri, Mike Phelan, Alan Pardew – but Bilic is still in his post. A Bovada review of betting odds shows West Ham are favourites to win half of their games between now and the end of the season.

They are fighting it out with Stoke and Southampton for a top-half finish, and if Andy Carroll stays fit they can certainly pull it off. In the betting over the next manager to be axed, Bilic is now all the way out at 40/1. That puts him below Arsene Wenger, David Moyes, Walter Mazzarri, Sam Allardyce and Marco Silva.

This has been a  season to forget: the European humiliation, being dumped out of both cups on the back of heavy defeats, the mid-season flirtation with the relegation and worst of all the Dimitri Payet saga have made it a pretty torrid campaign. But the shoots of recovery remain visible despite a few weeds growing around them. There are reasons be hopeful for 2017-18.

The team has got over the hoodoo of playing at the new stadium. They looked like deer caught in the headlights for most of their home games in the first half of the season – and played like it.

But we have started picking up points at home and have won five games there this season. They are also the league’s eighth best team on the road. If they can maintain that away form and strengthen at home, they could start to push for the European places next season and even threaten the top six.

It all hinges on how well Bilic and the wider team work the transfer market in the summer. It is a reality now that Premier League clubs play huge transfer fees: Crystal Palace spend £25 million on a centre forward would have been unthinkable a couple of years ago, but to succeed you need to splash the cash and the TV deal allows English clubs to go for it.

We all know the problems with Carroll and that big time striker is more urgently required than ever; a top level midfield man is required and of course a RIGHT BACK.

We might have to spend close to £70 million to make it happen, something  have never done before, but that is the name of the game.

Players will want to come to London, play in a great stadium in the world’s most exciting league, and West Ham can now show the necessary ambition to become a big club once again. The fans definitely deserve it.

3 comments on “Room for optimism at West Ham?”