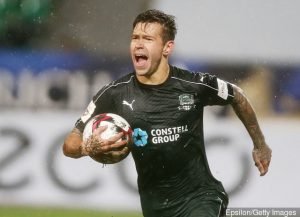 West Ham are looking to secure a last-minute deal that will see FC Krasnodar striker Fedor Smolov join the Hammers on loan for the remainder of the season after the departure of Diafra Sakho yesterday.

The Russian side would rather sell the 27-year-old forward outright and are demanding £12m for his signature rather than a five-month loan with a fixed option to buy. Sources close to the negotiations say the striker is yet to be convinced that West Ham would be a good career move for him and has yet to personally agree to a move to London and the Premier League.

Smolov started his professional career at Dynamo Moscow and was snapped up by Krasnodar in 2015. The striker is expected to play a big role for Russia in the World Cup this summer and has scored eleven international goals in 28 caps for his country. The forward wants to be sure he gets a regular start in any club he moves to.