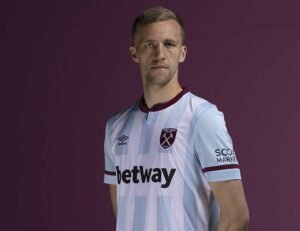 Soucek had our only chance

West Ham never threw a punch against a team that outplayed them, outclasssed them and were made to look as good as any  we have played this season as they completed a double over us.

Goals from Mbeumo (48′minutes) and Toney (64) were enough to see off a leggy and uninventive Irons team who will hardly have frightened any observers watching from Lyon.

It was Brentford’s fourth win in five games but didn’t dislodge the Hammers from the top six as they continue their bid to make it back into Europe next season.

On top of all the problems  with their display the Irons were also hit by an injury to Kurt Zouma which presumably will demand a scan before we know the score for Thursday night.

The reality of this game demonstrated that, like the  Spurs match after Sevilla,  the squad is being stretched to limits which we can only hope and pray won’t be too much for them.

Time and again they were ripped into by the Brentford forward players with Eriksen playing a major part in our downfall.

Beyond a Tomas Soucek header which sailed into the keeper’s arms we had barely a chance to speak of and both Lanzini and Antonio found themselves subbed  by Benrahma andVlasic who at least looked strong and willing.

At times it felt as though we were watching the Irons of two or three years ago, it was that poor.

Mr Moyes has some problems to sort in France. We’ll be expecting much better in what could well be a season defining game.