Saints boss hopes for TV football return as we isolate 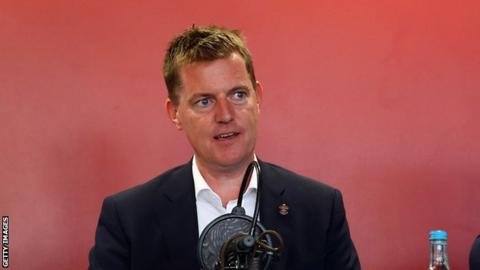 Southampton’s chief executive Martin Semmens has claimed that Premier League matches could be on television every day while people are still confined to their homes because of the coronavirus outbreak.

The BBC reports that Semmens says the return of the top flight  would be “a sign that the country is coming back to normal” but it should not happen before it is safe.

“We have to do what is right and safe for the general public,” he told BBC Radio Solent.

“When everybody is safe and we’re not using up NHS and police resources, the government would like us to get back to playing because we are entertainment and a sign that the country is coming back to normal.

“If people are home for another month and Premier League football is on the TV every day that can only be a good thing.

Not because we are more essential than the NHS but because we can give people entertainment and show that we’re fighting back.”

Semmens said teams are hopeful of completing the league by the end of June but did not yet know when play would resume.

ClaretandHugh says: The key words here it seems to us are “the government would like us to get back to playing because we are entertainment and a sign that the country is coming back to normal.” Whether he has been told that by government of it’s more a case of him speaking for them isn’t clear but regardless of that it’s nice to get something more upbeat as the country continues to cope with its present difficulties. its certainly a fabulous thought that we could have days of televised football whilst we enter into the later stages of this highly restricted lifestyle which has been plunged upon us all by a vile and invisible enemy. It’s not wrong to hope and it’s not wrong to be optimistic. Let’s hope and pray that Martin Semmens knows something we don’t although it remains a little difficult to see how we can call this one as things stand.