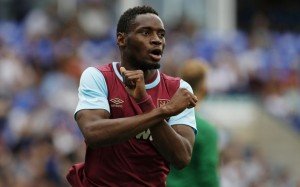 Former Hammer Diafra Sakho has told a French newspaper that he was destined for Germany before West Ham came in for him. He claims his agent was unsure but he was confident he would succeed as a Hammer if he was played.

Sakho told the press as part of a wide-ranging interview on his career “Honestly, at first, before I went to West Ham, I wanted to go to Germany, Borussia Mönchengladbach wanted to recruit me.The sports director of the club had a look and Metz talked with me. I was going to play, In my head, I was happy to go there, but Metz asked for 5 million euros while Monchengladbach proposed only 3.5 million.

“At the last moment, West Ham arrived. I  had made more than 50 match reports on me. My agent hesitated, and I told him “If the West Ham coach makes me play once, he’ll never get me out of the team again.’  That’s what happened.”

“My first year in West Ham was magnificent, Sam Allardyce, the coach, comes to see me at the hotel, he asks me what I plan to bring in addition to his team. “I’m here to score goals,” I tell him. I ask him how many goals his best striker did last season. Answer: Kevin Nolan, with eight goals. I then added by explaining that, if I played half of the matches, I was going to score 12.”

“I also remember my goal in Liverpool, the club had not won there for 52 years. In addition, I scored six in my first six games, a record! It was a great pleasure. Just like being voted player of the month in October in the Championship. Then I got hurt, and it was a bit more complicated’

5 comments on “Sakho breaks silence about time at West Ham”