Sakho for Baggies depends on other issues! 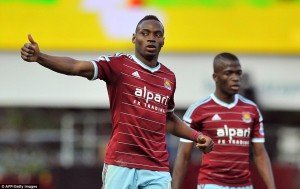 Diafra Sakho’s long discussed move to West Brom may have come a lot closer with the Hammers claiming they have had a £20 million bid for Andre Ayew accepted by Swansea.

Baggies boss Tony Pulis is a long time admirer of the Senegal striker who is demanding a move from the club after falling out with the club over his £27 million wages.

And there are new reports ths morning from Sky Sports that a £16 million deal has been done between the two clubs although it has been made clear to ClaretandHugh that any move depends on the Ayew deal getting done.

And with Swansea out of contact for the last 36 hours the Hammers have revised their earlier highly confdent odds forecast from 80 per cent likely to happen to 60 per cent,

We were told a few minutes ago: “It’s odd that we have heard nothing back from the club but we reman relatively hopeful – couple of days ago we would have put it at 80 pc – now it may be at 60.

We have said from the outset that nobody will go anywhere until we have other players in – that remains the case with Sakho and anyone else.

One comment on “Sakho for Baggies depends on other issues!”