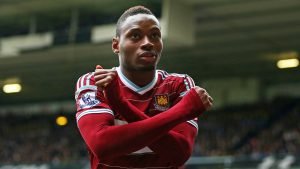 Diafra Sakho will head for a scan on the back problem which saw him miss his planned appearance against Stoke City this afternoon (Sat).

A club source confirmed to ClaretandHugh this evening that the player had complained of some pain in his back when he woke yesterday morning (Sat).

The pain was on the opposite side of the back to that on which he had an operation and the club medics decided to play it safe by making him unavailable for the match at the Bet365 Stadium.

We were told: “It was more or less decided by the player himself and the medical people had no hesitation in making the decision. He will have a scan on Monday to see if there is any real problem.”

Conspiracy theories that he and Slaven Bilic have still got issues simply aren’t correct as it was the player himself who made it clear he would prefer the back issue to be looked at.