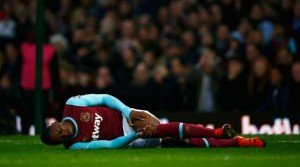 It is looking increasingly likely that Diafra Sakho could be out for months rather than weeks according to unconfirmed reports this afternoon by various sources.

His injury will be assessed over the next 24 hours when he is due to see a specialist to ascertain the full extent of the injury.

The early signs are not good and there are claims circulating that he could be out until February. Bilic admitted after the clash with West Brom that it didn’t look good saying.“The specialist will see him to give an opinion. It looks like a muscle injury and the first news is not the best. It is a big blow,”

KUMB.com have claimed the striker could be out for 10 weeks.

Sakho has scored five goals in 13 appearances in all competitions this season.

← Irons keen on Championship right back
WH Fan TV: “Nightmares are made of this” →
Click Here for Comments >