Sakho: Why Palace game is special for me! 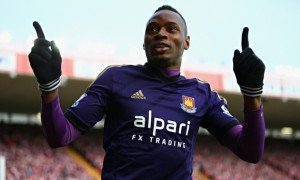 Diafra Sakho has quickly learned the excitement of London derbies but tomorrow’s game against Palace is especially important to him.

He said: “”I am really looking forward to our game on Saturday against Crystal Palace, I look forward to every game but particularly at home, playing in front of our fans.

“The game against Crystal Palace away at the start of the season was my first game for the club so it was special for me, we won as well which makes it better.

“Every derby is special for the fans, and for the players also. I’m quickly learning how important London derbies are, and after Palace we’ve got two more against Chelsea and Arsenal.

“They are all big matches, but honestly, I never get fazed by any match. The Chelsea game next week is huge for everyone. A Wednesday evening game under the lights at the Boleyn Ground is something to look forward to. But, we will only focus on the Chelsea after Crystal Palace.”

18 comments on “Sakho: Why Palace game is special for me!”