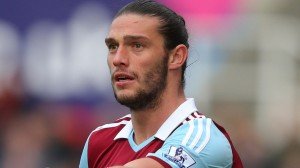 Andy Carroll’s return will not see the Hammers revert to Route One football…according to Sam Allardyce!

The 6ft 3in striker looks certain to feature at Everton today with the manager admitting again the player is ready to go without necessarily being 100 per cent match fit.

And explaining his tactical approach Allardyce said: “We play slightly different in that we play more into Andy’s feet than we do with Sakho or Valencia. Those two are so pacy we are a massive threat in behind when the midfield players start sliding balls down the side of defenders.

“Andy is not such a big threat in that area, he is a much bigger threat in terms of setting up attacks to get into the final third by playing to his feet or chest but not head.

“We want it on his head when it is crossed into the box because that’s where he’s at his best . We have scored more headers than anybody else even without Andy Carroll.”

Allardyce is aware of the threat from Everton full backs Seamus Coleman and Leighton Baines – who is fifty/fifty for today’s game.

He said: “We have to stop the service they give the forwards. That will be a key part of trying to make sure we limit Everton’s attacks

← Song: “I want to be part of the Irons story”
Nobes all set to be a record breaker →
Click Here for Comments >