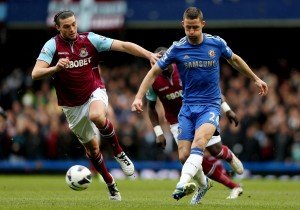 Sam Allardyce admitted the Irons had “not done enough to affect the game” against a very impressive Chelsea team.

The manager was disappointed too that we had conceded  from a corner saying: “We work so hard on our set pieces and  usually defend them well – that annoyed me.”

However, he added honestly: “We didn’t do enough – we weren’t on the top of our game and playing this team with the quality they possess you have to be right at your very best and even then it may not be enough.

“We played our best football when we were two goals down. Morgan (Amalfinao) headed wide and hit the post – you really want one of those chances to be taken and really test them.

“But we showed that we can create chances against a very good team and that was an encouraging feature of the game for us.”