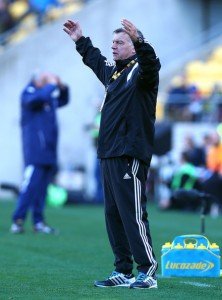 Allardyce declared in his morning press conference ahead of the clash with Burnley: “The owners have never questioned the style of play ever. They’ve never said to me I have to change my style, it’s a myth that they have. “They want better results than last season, we all do. And we’ve started to do that and we’re playing well at the same time.”

But tonight a very well placed insider told ClaretandHugh said the the remarks were a little bizarre given that is is “well known everywhere that was a big point at the end of season review meeting.

He said: “Sam accepted the board’s decision to introduce an attacking coach in their pursuit of a a more attacking brand of football. Sam accepted that decision and recruited Teddy Sheringham.

“It seem perhaps like a little re-writing of the script was going on but nobody would attempt to take any credit away from Sam for the change of system.

“However, to claim that there was no input from the board on the matter of the way we played seems perhaps a bit rich.”