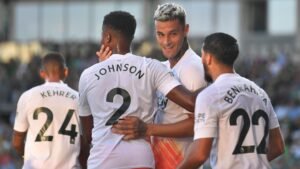 Gianluca Scamacca had a very poor night at Cambridge United and his inability to find the net from simple positions became a worrying feature of the friendly game against a League One outfit just above the relegation places.

The Italian came on for the second half in a move which saw Michail Antonio move to the wing and went on to miss three glorious chances as the Hammer strolled to their 4-2 win.

As a sidebar to that it’s worth mentioning that this may have been a great opportunity to play the two alongside each other but Moyes persisted with his usual tactic of playing one up – a scenario to which the No 7 is unused having had a partner at Sassuolo,

Last night however he had no excuses for the lack of chances provided but after going clear in the 55th minute shot straight at the keeper from close range – a poor result.

Then in the 79th minute he somehow managed to screw a simple chance wide before missing another from a similar position three minutes from the end.

In between times he tried a shot which ballooned over the bar from about 20 yards to complete a miserable night for him against a less than average team.