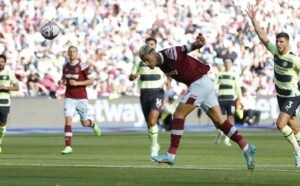 Manager David Moyes has hailed the arrival of Lucas Paqueta as a true statement of intent by the club.

And we have been told by French sources the midfield attacker who turned 24 this week is quite probably a better player than Dimi Payet which will be quite something if it turns out to be the case.

The signing too looks a great piece of scouting by Moyes and his No 2 Rob Newman given that the Brazil international is likely to play in a near two up system which saw Gianluca Scamacca score 16 goals last season.

There is little question – one would imagine – that with Paqueta playing behind him he will receive the assists he requires to bring out the very best in him.

Sadly, neither Manu Lanzini or Pablo Fornals have looked capable of doing that in a season which, despite the three points at Villa, saw another less than average performance in the main from us and during which Scamacca was feeding off scraps.

Moyes told www.whufc.com: “I’m delighted to welcome Lucas to West Ham. “He’s a player I’ve admired from afar for a very long time and of course, we saw him close up in our Europa League campaign last season.

“He’s a very talented footballer and whilst he will need time to adapt to the Premier League, we’re excited about adding another proven international to our squad.”