Season could be lost admits UEFA 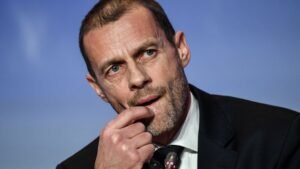 UEFA president Aleksander Ceferin admits the European football season “would probably be lost” if it fails to restart by the end of June at the very latest.

The governing body of European football has set up a task force to draft up a potential calendar for federations to follow after the CoVid-19 pandemic forced all of its major leagues to suspend. While Ceferin says there are multiple scenarios and plans up for consideration, he could not assure it will be possible to bring the current season to an end, with everything depending on how the pandemic will evolve.

“Nobody knows when the pandemic will end,” he told Italian daily La Repubblica. “We have a plan A, B or C: to restart in mid-May, in June or at the end of June.

“If then we wouldn’t be able to do any of these, the season would probably be lost. There is also the possibility of ending this season at the start of the next, which would then be postponed, starting a little later.

“We’re in touch with the leagues, the clubs, there is a working group and we’ll see what solution is best for all. We have to wait, like any other sector.”

“It’s difficult to imagine all the games behind closed doors, but right now we don’t even know if we will resume, with or without fans,”

“If there are no other alternatives, it would still be better to conclude the leagues. I can say that I’m not thinking about staging the European cup finals behind closed doors.

“In this dramatic moment, the most important thing is health, and to get out of this crisis. The interruption of football symbolises that Europe and the world have stopped.

This seems to match up with the latest reports coming from football authorities in England with a plan to re-start fixtures by the beginning of July possibly behind closed doors.

Premier League chairmen meet virtually this Friday via video conference to discuss the latest plans and scenarios to complete the league and domestic competitions.

One item likely to be up for discussion is the drop-dead date at which the Premier League cannot be finished without seriously disrupting the following season.

One comment on “Season could be lost admits UEFA”