Season ticket anyone? Good try but no cigar

The West Ham media department must have believed it was a great day to produce a sales pitch for 2015-16 season tickets.

A nice little win at Palace had kept the feelgood factor going all week with the Capital One Cup match result almost being overlooked as we headed for today’s game.

There was all the Alex Song hype going on and a planned introduction to the fans for about 2.50.

‘Perfect timing’ were presumably the buzzwords.

Unfortunately, however, Mr Allardyce’s latest attempt to win a match at the ground was in ruins a couple of hours later along, probably, with the latest marketing push.

One or two people working in the media department should surely remember the oldest cliche in football:  “It’s a results game.”

Good try but no cigar! 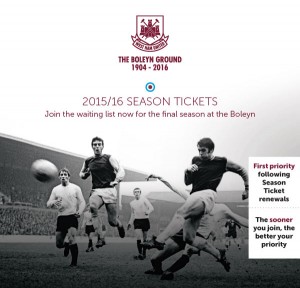