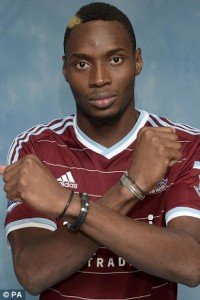 Senegal – it seems is still on the warpath making all sorts of threatening noises about Diafra Sakho being unavailable for the African Nations Cup.

Rarely has so much noise been heard as toys come flying out of a pram with Senegal Football Federation president Augustin Senghor saying the Irons waited until “the last minute” before letting him know about the situation.

That of course is very much open to question as the player was injured on New Year’s Day and the scans and specialists’ report was in their hands within three or four days.

It’s still only a week later and every nation has until the 17th of the month to finalise its squad anyway- so much for last minute. Much hot air it seems is rising over Africa.

As ClaretandHugh reported earlier, Senegal were told to send their own doctor to check him out, which hasn’t happened. Now whose fault could that be?

Senghor however, ranted to the Senegal Press Agency: “Obviously, West Ham have shown a lack of respect in waiting until the last minute before alerting us to Sakho’s unavailability for six weeks and even his inability to travel by plane to come and join the squad.”

The like his manager Alain Giresse he threatens that the SFAS will go to Fifa and the English FA to make sure our rights and the regulations are applied pompous; declaring: “And as such Diafra will not play for the specified for his unavailability.”

Perhaps if the player hadn’t been injured whilst in their care we may have a little more sympathy towards them – err actually No!