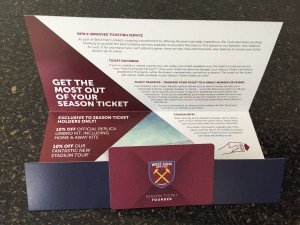 Over 51% of supporters claim they do plan to renew their season tickets which account for around 26,600 fans.The remaining 23% are undecided with many wanting to wait to know West Ham’s Premier League status before committing.

Last year around 10% did not renew their London Stadium season tickets meaning around 5,200 seats were allocated to the Hammers season ticket waiting list.  At a Supporters Advisory Board in February West Ham claimed that the waiting list now stands at 48,000 and that those at the top of the list where being contacted to check they were still interested in obtaining a season ticket.