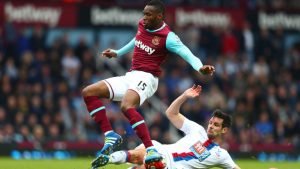 West Ham remain hopeful that Diafra Sakho will be on the move as the winter transfer market hots up later this month.

Crystal Palace remain interested and have been joined by a number of other clubs but most are keeping their options open until the deadline day approaches.

The striker – like Andy Carroll – has claimed to have a groin injury but scans have proved inconclusive.

However, that is not stopping six clubs from showing an interest in the player although at this time of the year various agents claim to have clubs lined up ready to do a deal!

West Brom, Brighton, Bordeaux, Rennes, Nice and Marseille are all interested in Sakho who is keen to improve his basic wage when he moves. His current contract remains heavily based on appearance bonuses.

His basic wageis reportd to be around a reported £30k a week and ideally the Irons would sell only at a minimum of £10 million.

The reality is they would sooner he played for a foreign outfit and that he doesn’t come back to embarrass them in the transfer window.

It may even be they have held off doing a deal with Palace as the Eagles come visiting us on on the 30th of January!