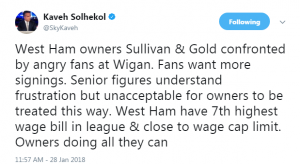 Sky Sports reporter Kaveh Solhekol has come under fire after posting a message on twitter defending West Ham owners David Sullivan and David Gold. On Sunday, Solhekol‏ took to social media to post a tweet which could have composed by the owners themselves.

← No way out of a Hammers hell
Report: Hammer told he can go out on loan →
Click Here for Comments >