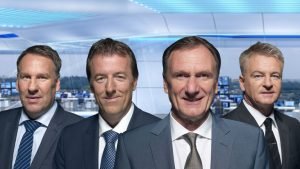 “I agree that West Brom have gone, not many would argue with that right now. Then, given I’m going for Crystal Palace to beat them this weekend, my next team is Huddersfield.Finally, after the embarrassing scenes last weekend, West Ham are my third side to face the drop. The atmosphere at that club is toxic right now and it is going to be very difficult to turn that around before the end of the season.”

Merson and Thomspon say West Brom, Huddersfield, and Southampton are down while Le Tissier thinks West Brom, Stoke and Huddersfield will be relegated.