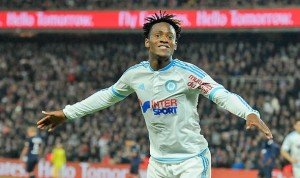 Slaven Bilic has all but dismissed suggestions that he holds a loan interest in one time taret and regular Chelsea sub Michy Batshuayi.

Newspaper reports arose a few weeks ago of a possible loan move to Upton Park but ClaretandHugh was told at that time there had been no contact although our insider explained: ” You can never say never but we don’t see Chelsea letting it happen.”

And the manager has confirmed that declaring: “It’s all stories. He was on a list of many, many clubs because of his achievements with Olympique Marseille. He’s a really good young striker.

“He was the subject of basically all the clubs that could afford him. He opted for Chelsea and that’s it. Ask him [about being frustrated on the bench]! It’s not frustrating for me!”