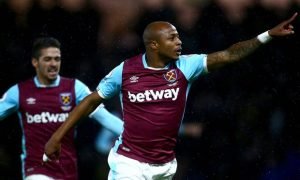 Ayew celebrates after the equaliser at Watford

Andre Ayew’s chances of being involved from the start against Chelsea on Monday night look to have been advanced by Michail Antonio’s absence through suspension.

Slaven Bilic could see him as Andy Carroll’s partner for the night and this could be the moment when the Ghana international kck starts his £20 million record transfer.

His goal on Saturday at Watford wasn’t the toughest he will ever score but the guy who looked sharper during his time on the pitch than at any time in his so far badly chequered Irons career.

And he may just be the man to latch onto Carroll’s knockdowns as Slav has to find a different way with Antonio’s hustle and bustle unavailable.

Ayew declared: “For me it was important to score – it was my first game back after the African Cup of Nations, I will continue to work hard and of  hopefully I will score more goals to help the team.

“It has been frustrating but sometimes football is a game where you have to be patient, keep and believing in yourself.

“I am not far away from 100 per cent – I played every game for Ghana at the African Cup of Nations and showed I could cope with the pressure. Hopefully everyone will be fit for Chelsea and we can give the supporters some joy.”