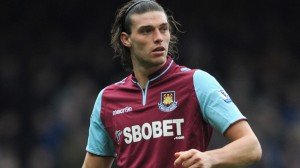 Andy Carroll will be in today’s squad for the game against Newcastle so long as he looks fit enough.

The Irons injury ravaged striker has been in full training this week but has travelled to the north east and has an outside chance of making his presence felt.

Slaven Bilic has admitted that it’s very tempting to throw the big fella in against his former club but needs to be absolutely certain he’s ready.

The Newcastle Journal reports Bilic as saying: ““It’s very tempting to play him. “If he looks to me fit enough, of course he’s going to be in the squad.

If he doesn’t look fit enough he isn’t going to be in the squad – it’s that simple. When he is fit we all know he is a major player.”

However, assessing the match,  the manager quipped: “But do you think it’s like Mayweather against McGregor? No. It makes no difference.”

14 comments on “Slav tempted by Carroll”