Posted by Sean Whetstone on February 25, 2016 in News, Whispers 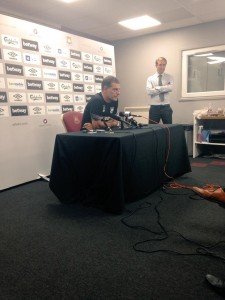 West Ham manager Slaven Bilic  has started his pre match press conference at 10am this morning ahead of our Saturday lunchtime match with Sunderland and Sam Allardyce:

“A few players are back, which is positive. We saw Lanzini was back at Blackburn”

“Sakho began training this week, and he needs more time, but Andy is back too. Winston has begun training as well but maybe won’t be available for Saturday. It is positive with the players coming back.”

“It was obvious that Cheikhou’s red card would be overturned, because it wasn’t a bad challenge and it wasn’t a goal scoring opportunity”

“We hoped, and we expected that the red card would be withdrawn, but still you have to wait.”

“Sam did great for West Ham. He has managed for 20 years very successfully, and he took West Ham at a moment when we were in the Championship. He got us up straight away and stabilised us in the Premier League, so he did a great job here”

“Sunderland are very organised, they are showing not only the quality but the character. They got four points from Liverpool and Man Utd. They have a quality not only on breaks, but also in different ways. There is still a long way to go for them but they have a big chance to stay in the league.”