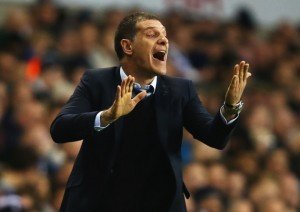 Slaven Bilic admits he still has a bitter taste in his mouth from the defeat at Everton because it was a game from which we should have got something.

Talking to the official site he said: We played some good football at times, we created some chances, so I am happy about that. I felt that they were vulnerable at the back, particularly at the beginning of the game and we created problems.

“I thought we coped with their strong attack well in the first half. But we can’t blame anyone else for this defeat, we can’t blame unluckiness, it was down to us. It was a 50-50 game, we just couldn’t take it.”He continued: “There’s a bitter taste because we know we should have taken something from this game. I had that feeling at half-time, and it continued as the game went on.“Once they scored, we knew it would always be tough to come back against them as they are a very difficult side to play against.”