Snoddy wants us back in the old routine 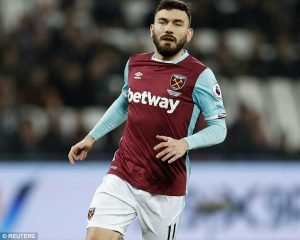 Robert Snodgrass may have a selection doubt hanging over him for today’s game but there are no such considerations around his enthusiasm and determination to start putting the season to rights.

Snoddy’s return from the shadows of a couple of years back has been a remarkable feature of the Pellegrini reign at the London Stadium.

And whether he makes it into the eleven today there can be no doubting the guy’s dressing room influence as he bids to help drive the team to their third away win in recent weeks.

He appears to believe the good times may be around the corner and a three pointer at Selhurst Park today would e the perfect start to a festive programme which could see us on a nine pointer and a huge rise up the table.

And he made his thoughts very clear on how we should be approaching the games in a piece on the club’s official website at https://www.whufc.com/news/articles/2019/december/26-december/snodgrass-we-want-make-it-right-against-palace he said: “We need to start getting into that habit again of what we did last season. We’d go on a run of five, six games and we need that over the next month or so.

“The next four or five games are vital. We produced a great performance against Chelsea, and then we were a bit more convincing against Southampton – we had a couple of chances, a goal chalked off, penalty claims and things like that.

“We played some good stuff against them, so hopefully we can take that into Palace, Leicester and Bournemouth and try to kick on.”

“Palace are a great side. There’s no question about it. Especially at home as well, they’ve put in some great performances.

“They beat Bournemouth with ten men, they’re very solid, they have players who can cause you problems and they have a lot of experience in the team as well.

“We know it’s going to be tough, every game is in the Premier League. We look back at the game at home, and we believe we played well in that one, and two moments have killed us. Fair play to them they took their chances, so we will try to make that right.”

5 comments on “Snoddy wants us back in the old routine”