Posted by Sean Whetstone on April 10, 2017 in News, Whispers 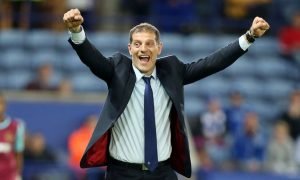 Given everything we read on social media I was pleasantly surprised to hear the audible crowd support for Slaven Bilic.

The song was repeated several things during the game against Swansea City long before we sealed the three points.

Slav – normally entirely absorbed in the game and not showing much reaction – showed his relief and pleasure by lifting his arm in appreciation.

Despite having a tricky second season in charge Slav seems to retain the majority of support from the match going fans and it was great to see supporters to get behind the manager as well as the players.

The win ratio is better than the three previous managers under Gold and Sullivan at West Ham. Avram Grant managed 31.91%, Gianfranco Zola was 28.75% while Sam Allardyce  37.57%.

2 comments on “So great to hear “Super Slaven Bilic””