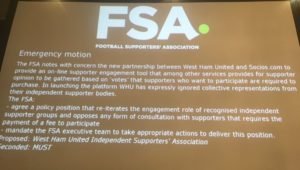 A message from the FSA posted on Twitter said: “Emergency motion proposed by WHUISA and Manchester United Supporters Trust relating to the monetisation of fan engagement by clubs & 3rd party commercial entities. The room makes clear its opposition to the Socios model of consultation and anything similar to that. Motion passed & National Committee will discuss further.”

The WHUISA motion reads: “This Association calls upon West Ham and Socios to suspend the launch of the Socios app pending an inquiry by the Premier League into this form of monetisation of supporter engagement. The default position is that fans should not pay for the right to express their views on matters of legitimate interest regarding the club they support.”

← Marega? Hammers set to keep balls in the air
Gomez crashes out without an appearance →
Click Here for Comments >