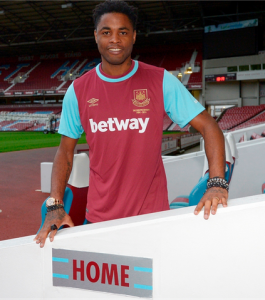 He is understood to have signed a one year dealwith a source telling us exclusively: “Yes it’s a one year deal but the player has indicated he’d like to stay longer.”

ClaretandHugh had said earlier in the afternoon that the player was due to rejoin the club on a permanent deal before the window closed and that has since been confirmed on Jack Sullivan’s Twitter account..

David Sullivan’s son tweeted the player saying: Alex Song ‘ I’m so happy to have joined West Ham again,” and that was followed by a plug for the new movie ‘Rise of the Krays!!!’