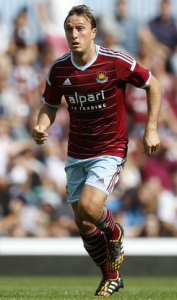 West Ham could be without Alex Song for the Tuesday night’s FA cup clash with Everton at Goodison  Park.

And with Diafra Sakha injured and Cheik Kouyate having joined Senegal for the African Cup of Nations tournament, we are likely to be relying on the ‘old firm’ to help us through a difficult Third Round clash.

Mark Noble is likely to return to the midfield with skipper Kevin Nolan for a clash which begins to look very tricky indeed.

ClaretandHugh has been told that Song has played the last couple of games with a sore knee and is likely to be replaced by Noble for a match which has the potential to define the Hammers season.

A source said: “Alex is expected to be rested  as he played two quick games with a sore knee whilst Kouyate has now joined the Senegal squad.

“Logic dictates that it will be Carroll and Valencia up front with Noble and Nolan coming in to fill the midfield berths.”