Jesse Marsch’s Premier League side had trailed the Welsh club 2-0 but Perkins scored an injury time equalizer to save the Yorkshire sides blushes by finishing neatly from a cross.

It wasn’t the upset the TV cameras craved but as the former Hammer celebrated his first professional goal, but it felt like a bit of a dagger to the heart of the West Ham fans. 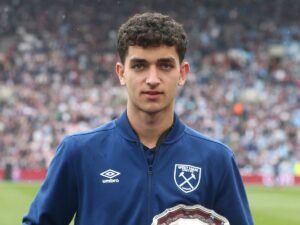 The former academy prodigy had announced that he had to leave The London stadium for ‘the sake of his career’ and this goal probably justifies his decision. Perkins was clearly thrilled as he crowed that “there are no better fans to score against than Leeds fans”.

It’s not all bad news though. With an independent tribunal still to decide upon the compensation fee due to be pad to the Hammers it may well be that Perkins value has just increased.

3 comments on “Sonny Perkins: There’s no better fans than Leeds”