Jose Mourinho made his feelings very clear on Tomas Soucek after the Spurs game claiming that Dvid Moyes had found his new Mourane Fellaini.

That’s one big compliment for a guy who of course works the midfield like a master and is one heck of an operator in both boxes.

But even he – who has been a revelation since donning the claret and blue –  refused to accept the Irons were second best and believed they were well worth their point and possibly a bit more. 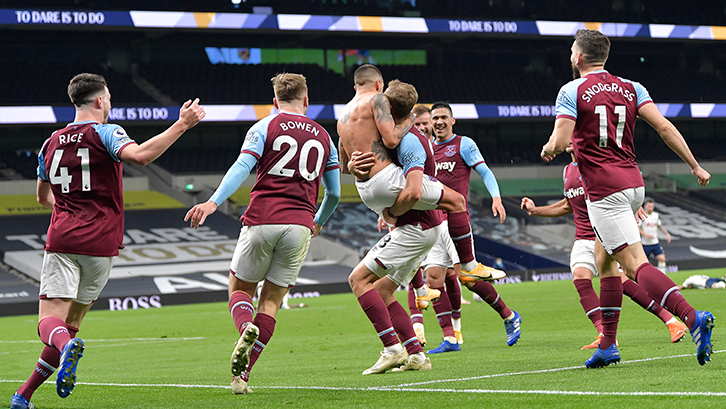 and Declan Rice have become the heartbeat of a Hammers team which suddenly looks as though it may be heading for something big this season.

Get something against Manchester City to follow the performances against Wolverhampton Wanderers, Leicester City and teh spuds and we can all start to believe that.

Like the rest of the squad Soucek couldn’t have been more pleased with the performance and result and spoke about the performance at https://www.whufc.com/news/articles/2020/october/19-october/tomas-soucek-it-was-massive-point-us.

He declared: “We are very happy. Sometimes it’s very boring when a team is losing 3-0 in the last ten minutes, but we had talked together at half-time and said we wanted to win the second half of the game.

“It was very hard because all week we had prepared well. We had seen many videos and tactics of them, but it is very hard for everybody when you’re losing 3-0 after 20 minutes.

“It was incredible because we played well I think. The whole game we kept the ball and created many chances, and we deserved a point – maybe three points – but still, after 80 minutes, we were losing 3-0.

“When we scored after 83 minutes, we all believed that we still had a chance. We attacked the whole game and we deserved our point.

“Then we scored three goals and it was an incredible performance for us, because the last ten minutes were beautiful and everyone could see us celebrate in the corner because Lanzini’s shot was beautiful.

“It was a massive, massive point or us, and it was great for us looking to the future. We want to go up in the table and to have a better season.”

‘Beautiful’ and ‘incredible’ are words befitting a goal of the majesty of Lanzini’s equaliser, which arrived in the fifth minute of injury time.

The Argentine’s first-time,  shot from 25 yards had an xG (‘expected goal’) value of just 0.01, according to analytics website Understat.

“For me it was incredible as well,” Souček said. “I believed in him because I know how he can score, how he can strike the ball, attack the goal.

“Every day in training he’s shooting very well. When he had prepared the ball, I believed that he would score – and we could see what a celebration it was.

“When the ball was flying high into the net, I celebrated and all the bench celebrated. All the team celebrated and everyone ran to the corner. It was a draw and I think we deserved a point – maybe more!”