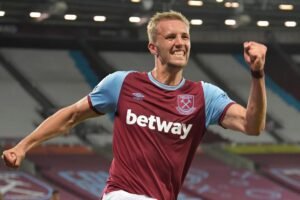 The amazing Tomas Soucek again rubber-stamped his Hammer of the Year credential when achieving an amazing defeat at Burnley last night.

A player we have noted more for his goals than defensive midfield abilities perhaps produced an extraordinary stat in the 2-1 win at Turf Moor in front of the back four.

In a stunning performance he registered a stunning 17 aerial duel wins against a side widely renowned for being particularly good in the air.

West Ham’s twitter revealed the stat which shows once again what an extraordinary buy the player was at just over £20 million.

It shows that 25 year old made more aerial clearances than 10 teams which is a staggering feat.

He lost only four of his attempted 21 aerial duels and we are coming to a point where we are lost for new words to describe the amazing impact this guy is having on the team.

← Tonka: Brilliant but that could mean bench for Dec
‘£9m Coufal’ better than the rest →
Click Here for Comments >