Spurs are well and truly in the race to sign Hull City star Keane Lewis-Potter this month.

ClaretandHugh has been told that Tottenham are keen admirers of the Championship ace, who has also been continually linked with a potential move to the Irons. 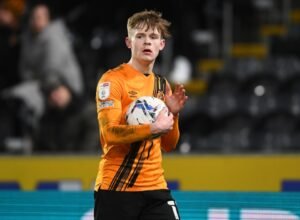 Sources at the north London club have revealed that Spurs are big fans of Lewis-Potter and have been sending scouts to watch him throughout the season.

Lewis-Potter has made 27 appearances in the Championship and has scored five goals, while also laying on four assists.

Still just 20, there is also interest from other Premier League clubs, including Brentford, but Spurs are hoping to beat the Hammers to the punch before the transfer deadline.

Any deal for Lewis-Potter, though, would involve Tottenham sending him back to Hull on loan for the remainder of the campaign.

That could well give the Irons an advantage in any transfer tussle, as David Moyes would likely want to bring him into the squad straight away, instead of sending him away until the summer.