‘Star turn’ may be set for a Sunday return 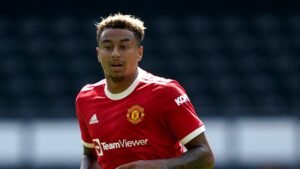 Jesse Lingard will be hoping that his three September goals within a week will help him make a return visit to West Ham in a Manchester United shirt.

The ongoing saga could take another twist following his England goals against Andorra and one for Manchester United against Newcastle in the 4-1 win last weekend with him hoping they will be enough to give him the opportunity of an appearance.

It seems reasonable to expect that the Reds manager Ole Gunnar Solskjaer may want to give him the chance  to perform on the stage on which he became a star turn last season.

There have been suggestions that the 28 year old attacking midfielder could be on hiss way back to the Irons in January but that may be unlikely.

The Hammers have invested £33 million in Nikola Vlasic who is five years younger and we   are well catered for in midfield so it would be a big surprise were the Hammers be interested.

However, Solskjaer may take the opportunity of letting the Irons take another look at the player.